What is AB Testing?

A/B Testing is a marketing optimization technique that is used to predict which creative approach will result in more engagement from potential prospects.

The technique is used for the optimization of web pages, direct mail and any other medium which is capable of randomly distributing different versions of the message to sample sets of the audience.

The variants are ideally shown to samples of the audience in a random manner to avoid any bias in the results. Generally speaking, every second person in the sample sees the alternate variation. 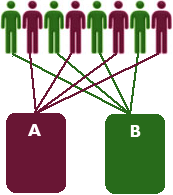 Back to marketing glossary