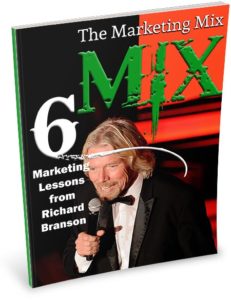 “Screw it, let’s do it” is how Sir Richard Branson describes his approach to business. That’s not very helpful as a marketing lesson, yet his marketing insights below are both practical and powerful.

Branson, the adventuring entrepreneur and chairman of the Virgin group of companies, is a rare individual. He started Virgin Records in 1970, and now 40 years later, the Virgin group of companies has eight businesses generating more than $1 billion per year. According to Forbes’ real-time networth report, he is the 212th richest person in the world, with an estimated net worth of U.S. $4.9 billion, as of July 6, 2016.

What’s different about Virgin is that it isn’t one company, or one idea, but a global brand with a distinct personality which spans retail, music, airlines, telecoms, media, drinks, energy and even space tourism. Branson describes the Virgin companies as a keiretsu – a family of companies that form a tight-knit alliance to work toward each other’s mutual success. What unites them is Branson’s vision, drive, personality and the Virgin brand values shared by all members of the group.

There’s much to learn from Branson’s business strategy and his willingness to break new ground in just about everything he does. Here are a few insights that were picked up by Charles Nicholls during one Branson’s keynotes:

1. You don’t have to be a category leader to have a successful business

“We’ve had a lot of fun taking on fat cat complacent business. What we’ve done is be the small guy yap-yapping at the big guys taking a small percentage of their market.”

“Virgin has gotten big by being small. I don’t think that any Virgin business has ever been the biggest in its sector. Being small has its advantages – the Virgin Record label was able to attract the Rolling Stones because they know that they wouldn’t be lost on a long list of bigger bands.”

2. Thinking, breathing and acting like a customer is essential

Customers figure large in Branson’s formula. In 1984, with no knowledge of the airline business other than what he learned from being a transatlantic airline passenger receiving appalling service, he set out to create Virgin Atlantic.

“We had this crazy notion that we could do for the aviation business what we’d done for the record business. Banks dropped us like a hot potato, telling us that the last thing the world needed was another airline.

“But we had an advantage of not coming from the airline business. We didn’t know what we didn’t know. We were all fed up with flying airlines with grouchy staff. All we knew was from the customer’s perspective, and we set out to build a value for money proposition based on great service. We recruited staff that actually wanted to fly — fresh, lively and eager to have fun.”

This is a brand spirit celebrated in this Virgin Atlantic ad which reflects on the airline’s creation, values and culture:

3. Free advertising can be a company’s best promotional tool

Virgin’s approach has been to build a distinctive brand largely on the back of free advertising, and often with a sense of fun. Branson recalls how one day he received a phone call telling him that the London Eye, a 440 foot Ferris wheel in the heart of London, at the time sponsored by arch rival British Airways, was late in being erected. “I thought screw it, let’s do it, and within three hours we had an airship flying over central London with a banner ‘BA can’t get it up.’ It generated us millions of dollars in free publicity. I had a lot of fun putting Virgin Atlantic on the map.”

Lots of digs at larger competitors can generate a lot of publicity. “The businesses I became closest to are the ones that, like a child, were getting bullied. Virgin Atlantic went through a lot of bullying from the bigger airlines, who went to extraordinary lengths to try to put us out of business. So it was like having a daughter at school and people being nasty to her. It’s been wonderful to see that child grow into a lovely woman and see her flourish”

4. Customers define your brand for you

Branson echoed a theme of the Connections conference: That customers are defining brands through their conversations. “Today it’s harder to keep on top of these conversations. Conversations about our brand are happening everywhere, and with the Internet as the great equalizer, it doesn’t matter if you know the brand intimately, or if you’ve had just one bad experience, it will be heard.”

But great customer service has always been defined by the opportunities presented when things go wrong. A Virgin America passenger, using onboard WiFi, tweeted that he wasn’t happy that his meal hadn’t been delivered. The ground team picked up on it, contacted the aircraft, and found him his misplaced meal.

Branson describes Virgin’s use of social media as, “We continue to approach social media with a healthy sense of fun.”

He gave an example of a Twitter promotion for Virgin America — “$5 donated to KIPP Schools for every flight booked today” — which resulted in the fourth-highest sales day for the airline.

Branson strives to set a culture of being fearless in engaging customers. “I’ve always enjoyed calling randomly selected newly arrived Virgin passengers in one of our limos to say ‘Hi, This is Richard Branson, I wanted to say thanks for flying with us and see how you’ve enjoyed the flight.’ On more than a few occasions this has been met by derisive comments like ‘Yeah, right. I’m sure the real Richard Branson has nothing better to do. Who the hell are you?'”

Branson’s philosophy on starting businesses is very customer centric: “Get the product right, put a great brand on it and then you’ll have a great success.”

Need Help with your marketing? Get a consultation with a specialist.